Turn your C64 into a wah effect.

Please do not use this software if you suffer from epilepsy, migraine, or other photosensitive conditions!

This software is our personal and romantic way to celebrate the 40th anniversary of the debut in 1982 of the most successful computer ever. Without the C64 there would probably be no Orastron.

A-SID allows you to turn your C64 into a wah effect. No hardware modification is required, but you need to build yourself one or two adapter cables and copy the program to a cassette. Instructions are given below.

Otherwise, if you are not a lucky owner of one those marvellous machines, you can use our free VST3 that gives you the possibility to experience A-SID on modern computers as it emaulates the original analog filter.

If instead you are totally debauched to the point of not willing to even download the damn thing, you can just try an online demo below.

Creating this software has been a fascinating journey that absorbed an immense quantity of energy and time. We don't ask for your money or your data, and we are happy to release (almost) everything as open source software. We're simply happy if you like it.

We would really appreciate if you could spread the word about A-SID and Orastron with friends and on social media, forums, etc. Bluntly put, we'd love to make innovative premium consumer products, but we first need an audience for that to be economically viable.

To keep up to date, you might also want to…

Getting the program to work on the C64 is a somewhat lengthy process but brings great satisfaction. We're sorry we couldn't make it easier since we didn't have the time and resources to actually produce and sell everything that's needed. So you need to DIY following these instructions.

Then you should copy it to a cassette (since disks are notoriously for losers). The Commodore 64 Survival Manual suggests using ferric oxide Type I audio cassettes. We had reasonable success with these ones as long as they were not recorded multiple times.

You have essentially two options for recording:

In either case, we suggest using WAV-PRG (it even runs on Linux via WINE, which makes us particularly happy) as follows:

If all goes well you can LOAD the cassette and you should see the "FOUND ORASTRON A-SID" message. Otherwise, if you went with the sound card + cassette recorder method, you could try again also selecting "Inverted waveform" in the "Advanced options" frame.

Build a breakout cable that has one on end a male DIN-8 262° connector (they seem to be not so easy to find, we got a few from here and on the other two female TS audio connectors (audio in and out) and optionally a female RCA connector (video out). You can still use the RF port to take the video and audio outs to the TV.

Do not feed input signals that exceed line level! We don't want to see more fried SID chips around.

While C64 paddles have an impedance range of 0 to 470 kΩ, the calibration procedure allows you to also use common pedals with lower maximum impedance. However, we still recommend using pedals that have the widest impedance range you can find as they give better impedance readings.

... and press play on tape. When the program is loaded type RUN and press RETURN (sorry, we haven't implemented tape autorun yet) and just follow the instructions on the screen and enjoy.

In order to install it, you just need to unzip the file and move the asid.vst3 folder into the user or system VST3 folder, which are typically located at:

A-SID is mostly open source software (the only proprietary components are related to the online demo). You can find the official code repository here. The entirety of the code there is released under the GPLv3 license.

Developing this project involved many different activities, which we have documented thoroughly in a series of blog posts. The repository hence contains interesting bits that can be independently reused in other projects, such as:

This work wouldn't have been possible without the direct and indirect help of many people around the world.

We want to warmly thank, in no particular order: 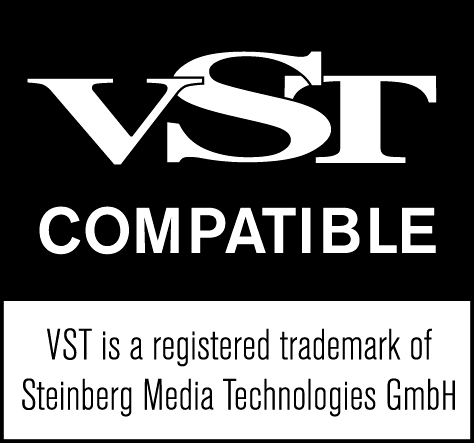 VST is a registered trademark of Steinberg Media Technologies GmbH.

All trademarks and registered marks are properties of their respective owners. All company, product, and service names used in this page are for identification purposes only. Use of these names, trademarks, and brands does not imply endorsement.